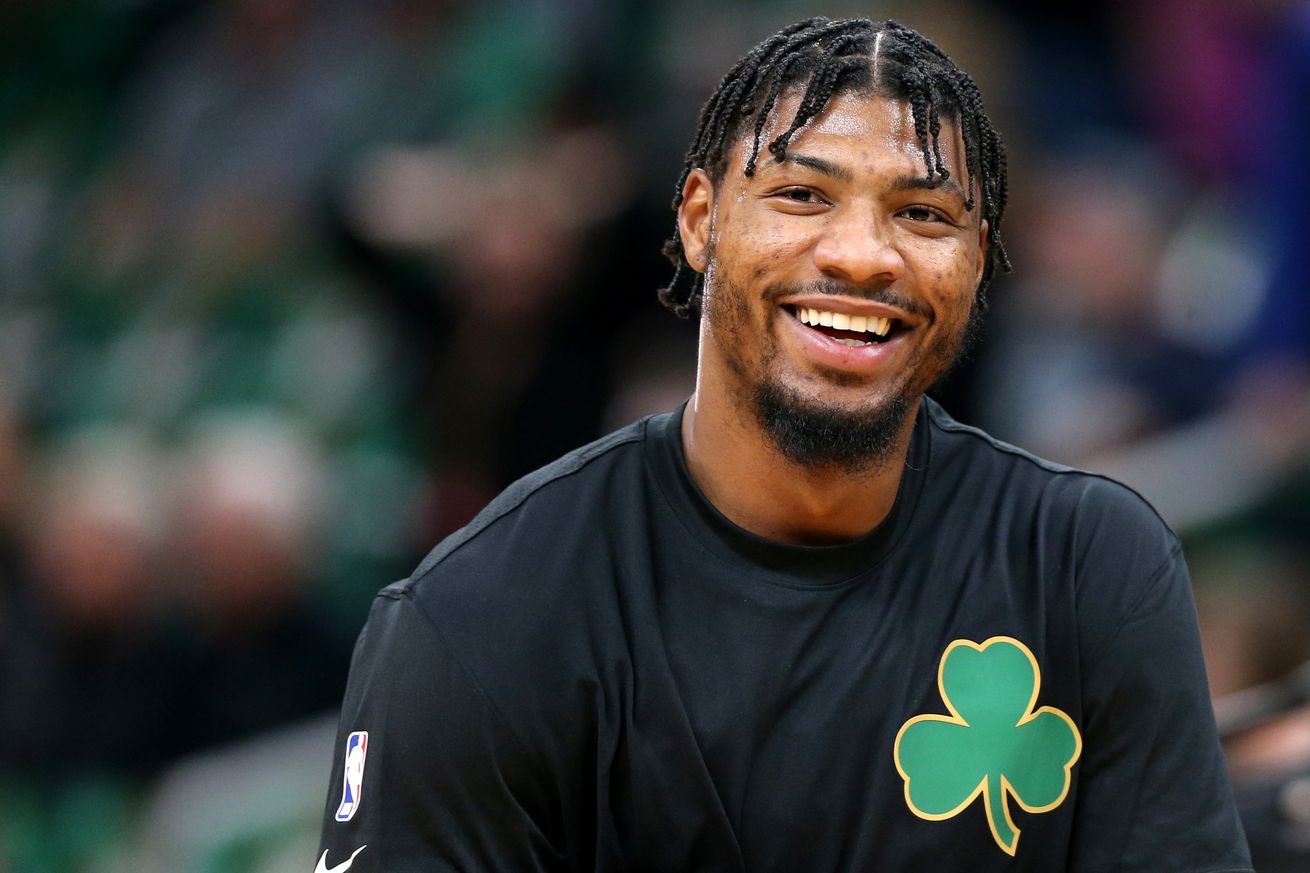 Celebrate Marcus Smart with your friends and family this holiday season.

The holidays are fast approaching. You may be wondering what kind of basketball-centric delight to share with your loved ones. Well, we’ve got good news for any and all Celtics fans. Rugged point guard/wing/center Marcus Smart has a tried and true collection of grifts that are suitable for friends and family of all ages and persuasions. Enjoy!

For the traditionalist in your life. Smart has perfected the art of selling interactions that live in the grey between foul and non-call in his favor. Catch him lightly in the chest, and he’s likely to kick his legs out and fall flat on his back. Knock him solidly to the ground, and Smart will launch himself sliding along the floor as though he’d just been hit by a train.

You may, for example, recall the following sequence of events from last season:

These types of antics are often derided by opponents and their fans, but such condescending critiques belie the talent needed to pull them off effectively. A flop can only be performed if a player has the timing, intelligence, and athletic ability to position themselves appropriately and the willingness to take the additional beating of tossing themselves to the ground repeatedly, all qualities Smart has in spades. He deserves to be appreciated for that fact, not rebuked.

4. Working the Refs and Critiquing Opponents

One of the most truly magical parts of Smart’s on-court persona is that he doesn’t just complain to the referees when he disagrees with a call, but he actually becomes particularly aggrieved when opposing players execute grifting strategies similar to his own. Keep an eye on the Cetics’ bench as the following play unfolds. Smart’s indignation at Patrick Beverly’s dramatics – which mirror his own – is special.

It’s an ironic bit of psychological warfare he uses to further sell the idea that his own flops and feints are actually every bit as legitimate as they may appear in real time. Plus it comes with the added fun of really riling up opposing fan bases. You can’t put a price on that.

This is, perhaps, Smart’s most reliable tool in his grifting tool box. Arms and elbows are constantly flying in NBA games. Players rarely contest a foul call when they accidentally catch an opponent in the face or head. It’s hard to argue against such actions as infractions, even if committed without intent.

Referees are on the lookout for fakers, but the game moves incredibly fast, and it’s difficult to distinguish the differences between a true shot to the face and a close call that may have been enhanced with a bit of acting. Smart applies such techniques with aplomb, sometimes even pretending to have been hit when no contact has been made.

Toss in a patented grab of the face and a bit of writhing on the ground in faux pain, and officials can be duped. There’s a danger in being outed using this strategy with the current prevalence of replay reviews and newly implemented coaches challenges, but only the truly egregious grifts – those in which Smart goes untouched and still crumples to the floor – are at real risk of being reversed. Those are few and far enough in between not to be a major concern.

2. The Box Out Flail

On occasion, Smart will stick his nose down among the tall trees, position himself for a rebound, realize its not headed his way, and then violently throw himself sideways, as though someone had undercut him in mid-air. This strategy gave us what many consider to be his most theatrical and insane grift attempt (seen below).

Smart has turned to the box out flail with less frequency in recent years. Perhaps due to the physical toll it extracts, or maybe simply because he hasn’t found it to be particularly effective. In either case, it’s a classic that deserves to be celebrated.

The offensive head pop is, as one might have guessed, a close relative of the defensive head pop. The strategy behind the two is essentially the same. Feel a slight touch of contact or see a limb fly closely by your face, and act like you took a shot from Mike Tyson.

We’ve given it the top spot here not because of its beauty or even its effectiveness, but rather because of its nature as an offensive grift. So much of what Smart does to help his team comes on the opposite end of the court. He’s inarguably one of the best defensive players in the league.

Smart’s defensive flops are mixed in a bag full of plays that make you say “how did he do that?” They exist as part of a tapestry of defensive brilliance that just feels right. Smart’s offensive play is less plainly impactful, which make his grifts all the more pure. Each deserves to be celebrated this holiday season, but none more than this. 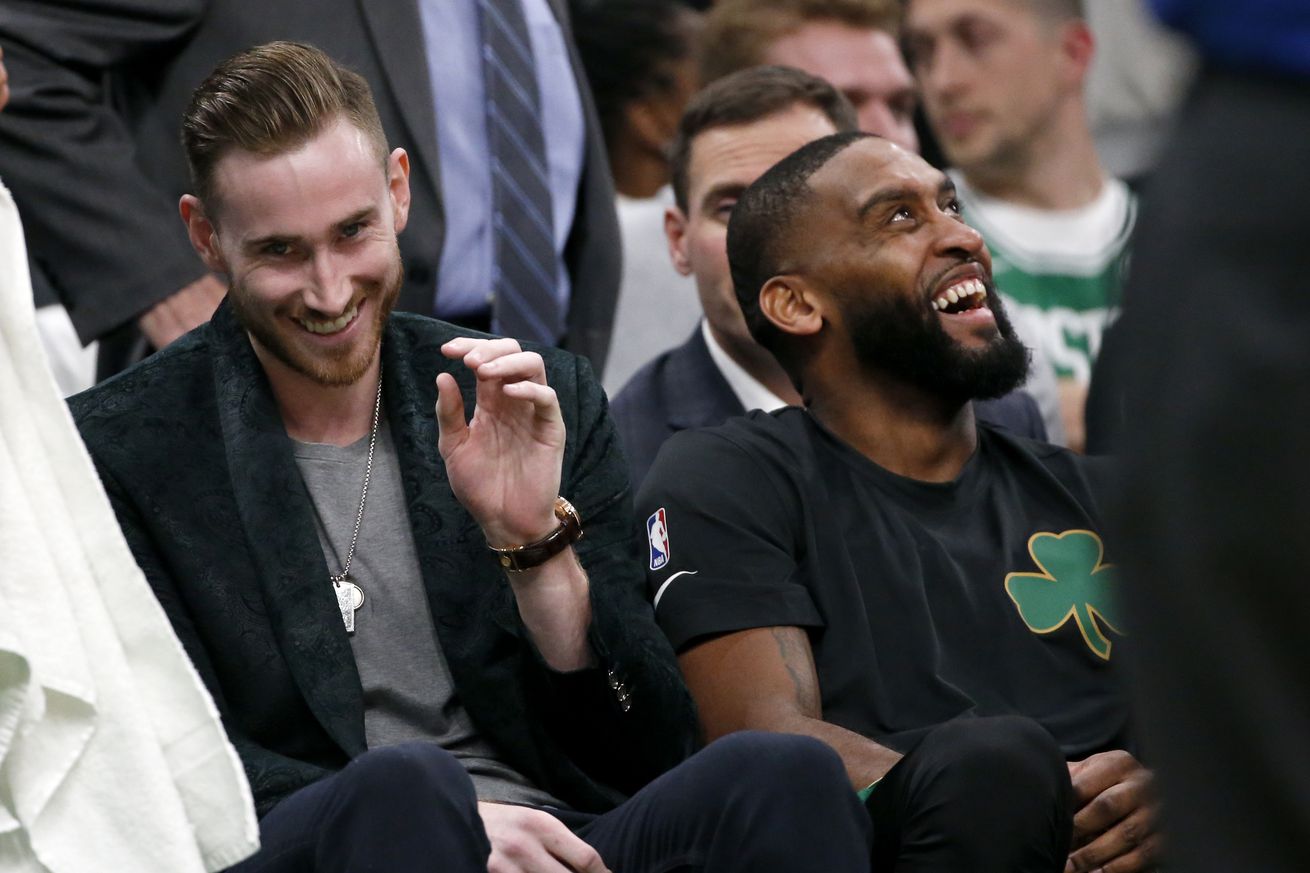 After today’s practice session, Boston Celtics forward Gordon Hayward spoke to the media and flagged a possible return from injury as early as tomorrow. Per Chris Forsberg of NBC Sports Boston.

Gordon Hayward on his broken hand…

“Bone has healed, probably stronger than my right hand. There’s a plate in there with screws. The bone is good. … Tomorrow’s a possibility. See how I feel when I wake up, go through shootaround, see how it goes.”

At today’s practice Gordon Hayward talked about his hand and the possibility of returning to action at TD Garden tomorrow night. pic.twitter.com/SD50wZnyPy

Gordon Hayward has spent a month on the sidelines following a November 9th clash with LaMarcus Aldridge in San Antonio. The 16-5 Celtics host the 5-17 Cleveland Cavaliers Monday night at 7:30pm.

Gordon Hayward possibly playing tomorrow is about as good a result as the Celtics could have have hoped for given his injury. The bone is fully healed and he could give it a go. If not tomorrow, I’d expect him to play later this week with IND/PHI back-to-back on tap Wed/Thu.